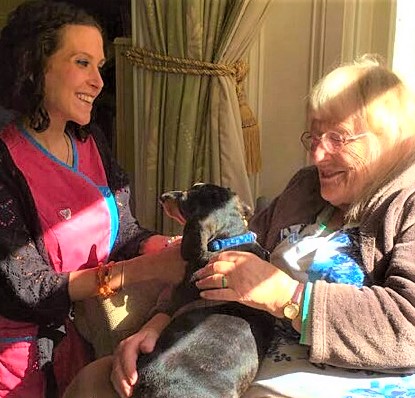 Tamzin Moloney at Oakfield Care Home in Weston Park, Bath, has achieved the award for ‘Best Activity Coordinator of the Year’ in the prestigious NAPA (National Activities Providers Association) awards 2017.

She was selected by the judges from 180 entries for this award.

Tamzin has been Activities Coordinator at Oakfield for nearly three years. She said: “This is my first job in the care industry and now I wonder how I could ever leave it. The best thing about it is seeing someone completely absorbed in an activity and the smile it puts in their eyes.”

She was previously involved in volunteer work.

In naming Tamzin as Best Activity Coordinator of the Year, the NAPA judges praised her for going above and beyond what would normally be expected in her job and for her creative, sensitive and person-centred approach, which was all about the residents’ interests.

Tamzin has also been singled out by the Care Quality Commission in a recent inspection report rating Oakfield Care Home, which is run by operator brighterkind, as “good.” The CQC report commended that she: “has been proactive and imaginative in creating sessions in consultation with people.”

Group activity sessions are held for residents in the home during the afternoons and vary from exercise classes, crafts and music to outside entertainers. There are also organised outings, People who remain in their own rooms, are offered one-to-one time during the mornings.

Tamzin said: “My approach is to understand each person’s uniqueness and what activities have most meaning and enjoyment for them. Everyone is creative in some way and nurturing our creativity gives us purpose. It may be through baking cakes, arts and crafts or music, so let’s organise groups who share those interests. It may be poetry so let’s arrange readings or write poems to enter competitions. It may be that their garden was their interest, so let’s get them into the gardens or create an indoor garden in their room.”

A resident, Sheila, was regarded as one of Southern Irelands finest seamstress, but she thought she was past being able to sew. Tamzin took up sewing and would sit with Sheila and ask for advice and help. Over time, Tamzin got Sheila to unpick mistakes and after a year of this subtle encouragement, Sheila took up sewing again. Once she got started she would sew into the evenings to get the work done with that same devotion that she always had. The week after she completed her first project, a Remembrance Day poppy, she was asking Tamzin what else she needed sewing.

Tamzin arranges special experiences for residents through a “wishing well” scheme that runs at Oakfield and all brighterkind homes. One of her fond memories is of a wish granted to Bridget, a lady who had been a land girl and had worked on a farm all her life. She wished that she’d had a donkey but was never able to. At 94, it wasn’t feasible for her to take one on, but Tamzin arranged to take her on an outing to a farm where she met a retired donkey that had been re-homed. Bridget adored being him the company of this old gent, who in donkey years was a similar age to her. She also had her first experience of feeding a newborn lamb. Tamzin said: “It was moving seeing her joy at being back on a farm and listening to the pride with which she shared farming stories.”

Jeremy Richardson, Chief Executive of brighterkind said:” Recreation and activities are more than just bingo and quizzes and Tamzin exemplifies the special qualities that activities coordinators should have. Her award as best activities coordinator recognises her total commitment to her job and to the people she keeps happy, active and creative.”