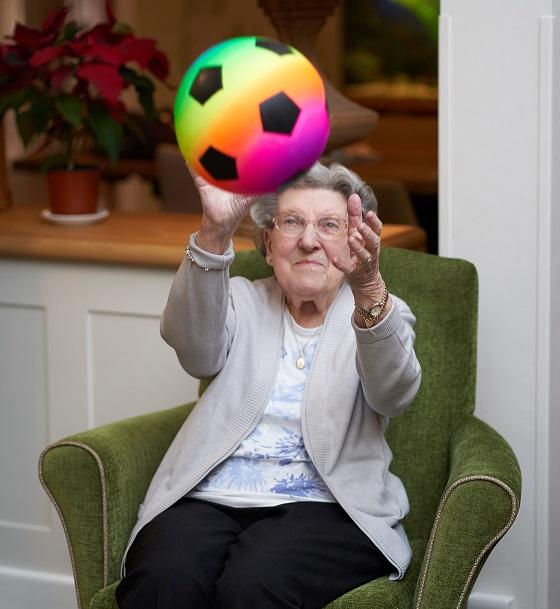 A team of elderly residents within each brighterkind care home have kicked off in a national inter-homes soccer competition inspired by the FIFA world cup.

With the average age of team members being in the 80’s, they might be expected to sit back and watch TV highlights of cup matches, but instead they are taking part in a penalty shoot-out challenge in slipper soccer, which is football adapted for the needs of older people.

Sally Harrison, Head of Activities at brighterkind said: “Some people think that as we get older we should do less physical activity but maintaining an active lifestyle is important to promote mobility, flexibility, coordination and wellbeing. The sporting element makes exercise fun and our residents are really looking forward to the penalty shoot-out competition.”

Slipper Soccer was developed in partnership with Age Concern’s Older Men’s Network an Oomph! and award-winning social enterprise that is the largest provider of wellbeing programmes for older people. Participants are seated and the ball is lighter than a conventional football, but the game features familiar skills such as such as passing and penalty shoot-outs.

It is one of the familiar sports adapted for older people that have been introduced in all brighterkind homes as part of the home’s Magic Moments programme of activities. Others include Clock Cricket, a team game with bat and ball, developed by the English Cricket Board and Hertfordshire Cricket, which is accessible to people with mobility challenges and Armchair Volleyball, an adaptation of Volleyball England’s Seated Volleyball.